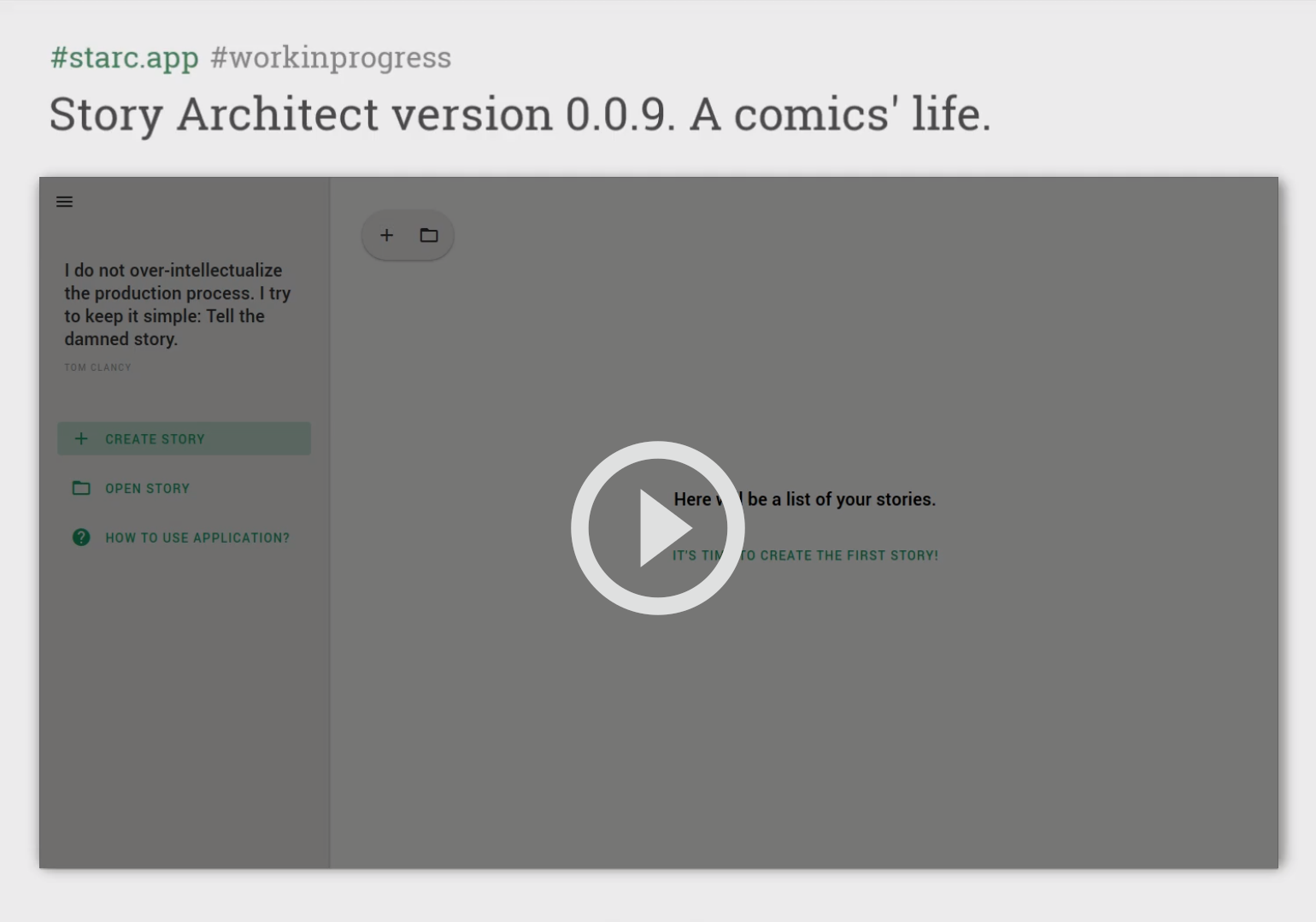 The next update of Story Architect 0.0.9 is ready to see the spotlight and hear your applause! :)

We were working tooth and nail on this release. The main focus was on adding a comic book module. Why? To test the architecture of the app and make sure its ready for any kinds of extensions. Everything went as smoothly as possible, so making a short route change to focus on this was very useful. Further, we will move forward at a wild speed and fill the app with everything to give authors maximum space for creativity and protect them from the routine.

So what's under the hood:
-- A full-featured comic book scripting module has been added;
-- you can now add a new document type to the project - the comic strip;
-- setting parameters for the comic, title page and synopsis;
-- smart input when working with comic book text;
--- write a page or a panel, press enter and the program will automatically identify and number the created element;
--- auto-completion of character names and states;
--- automatic numbering of character lines
-- tips for spreads when they fall in the right place, or on the edges of different spreads in the book;
-- adding comments to the text of the comic book;
-- navigating through the text of a comic book script with the ability to rearrange panels and pages;
-- displaying the number of panels on the page;
-- displaying the number of words in the dialog boxes of the panel and a whole page;
-- easy statistics of the script;
-- you can export the comic book scenario in PDF and DOCX formats;
- Export of the title page along with the script text has been added;
- Standard cover pages have been added to the script templates;
- An option to restore the standard title page has been added;
- Optimized the work of the script editor in the copy / paste / edit cases of large documents;
- Linux version is now packaged in a universal AppImage;
- General settings for all text editors have been moved to a separate group to avoid duplication of options;
- Keyboard cursor navigation in tables has been improved;
- The algorithm of the autocorrection of the script text on the page breaks has been improved;
- Fixed an issue with the app freezing when scrolling the screen with a large character or location description;
- Fixed an issue with exporting a script to DOCX for Hebrew;
- Fixed an issue with the app crashing when trying to create several new projects in a row;
- An issue with creating a project with prohibited characters for filenames in Windows has been fixed;
- An issue with keyboard shortcuts in Mac OS X has been fixed;
- Fixed and issue with text selection disappearance when calling the context menu in Mac OS X;
- And many more minor tweaks.

It's already so cool and it's going to be even cooler!

At the moment the basic functionality we’ve been planning to include in the first public version is done. We're now moving to polishing and fixing all the issues.

And our next goal is to publish the first public version of Story Architect 0.1.0 on January 1, 2022!

Until then I wish you all a good day and please enjoy the new version of the app! Peace!