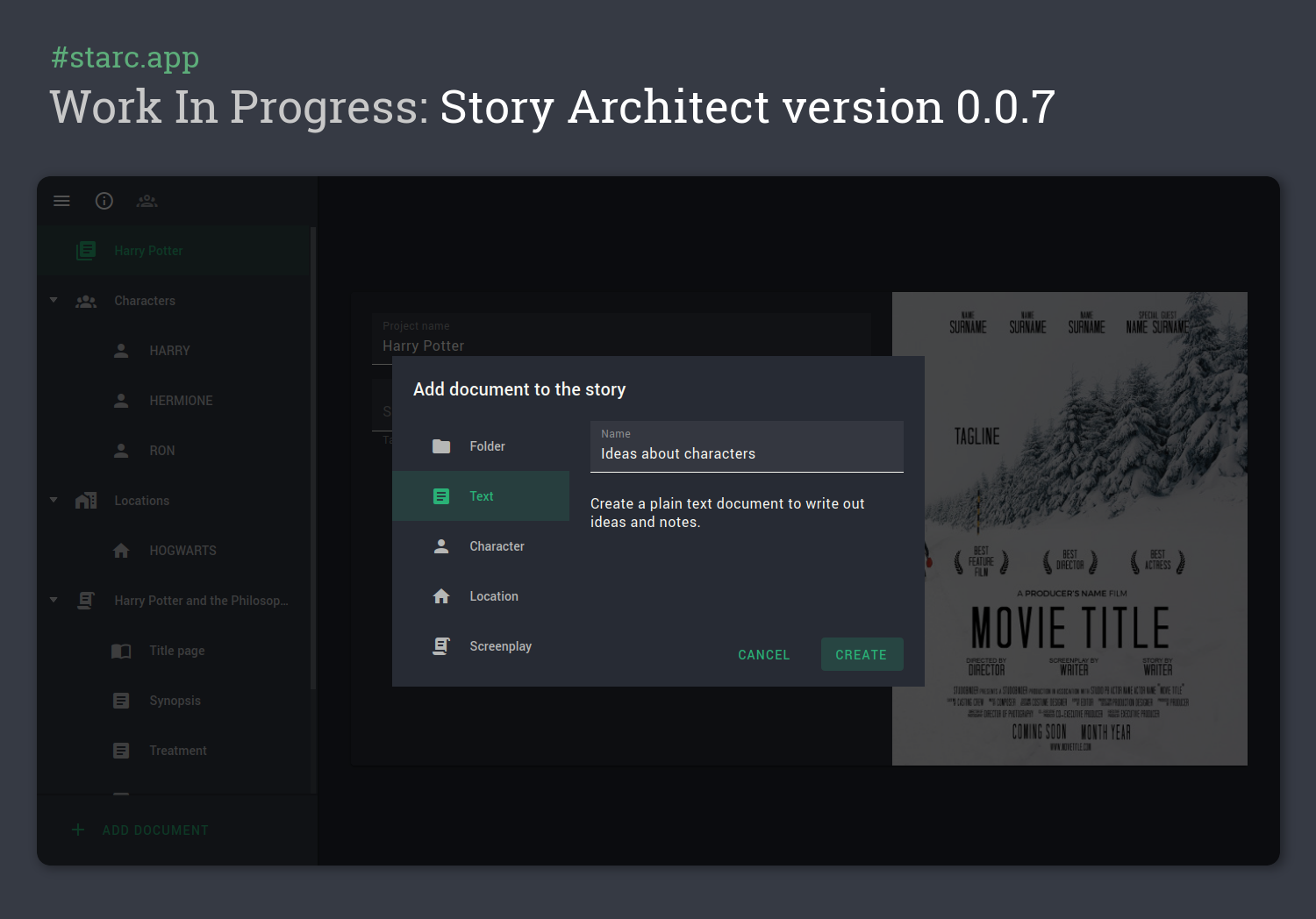 Today we are publishing the next Story Architect 0.0.7 update. We assume this will be the penultimate version of the closed beta test, after which we will move on to the open test stage! Most of the features that were planned for 0.1.0 release are ready now, so we hope that very soon we’ll publish the links to download the application for public access and extend the website and start moving at a faster speed :)

In the meantime, this update includes the following improvements:
- it’s now possible to save the project to another file (Menu - Save As...);
- text editor is added so it is now possible to add folders and simple text documents to the project, and the script synopsis is now available for editing;
- the ability to import script text when creating a new project has been implemented;
- import of character and location descriptions from KIT files has been added;
- updating the names of characters and locations in all scripts of the project has been implemented when changing the name directly in the Character or Location Editor;
- displaying frames in the script text navigator has been added;
- added an option to hide dialogs by clicking anywhere in the app outside the dialog box and the Escape button;
- option of specifying on which side the scene numbers should be printed when exporting to PDF has been added;
- added a Tamil script layout template and spelling dictionary;
- document changes are now compressed before being written to the project file, saving about 60% disk space;
- rules for dragging and dropping project elements have been adjusted;
- improved saving of the script text on the page breaks;
- control of the app through the keyboard has been improved;
- improved rendering of the folder icon in the script editor;
- block transfer rules have been improved as well as issues with the algorithm for determining transfers, which caused the application to freeze or crash;
- after app installation the page timing will be set by default;
- fixed an issue with the navigator and the script editor panels collapsing when minimizing the application;
- issue with the script editor moving away and displaying a red area instead of it has been fixed;
- fixed an issue with visibility of added document types in the light and dark theme;
- fixed an issue with overwriting block formatting when changing the document template;
- fixed an issue of the timekeeping calculation after the start of the application, if you use a design template other than the default one;
- fixed an issue with updating the current block style when canceling/redoing the last action;
- fixed a problem with the recalculation of timekeeping for the scene, in which the text from the clipboard is inserted;
- fixed a crash of the app when trying to create a new document in a newly created project;
- a lot of smaller changes related to the interface and the overall logic of the application.