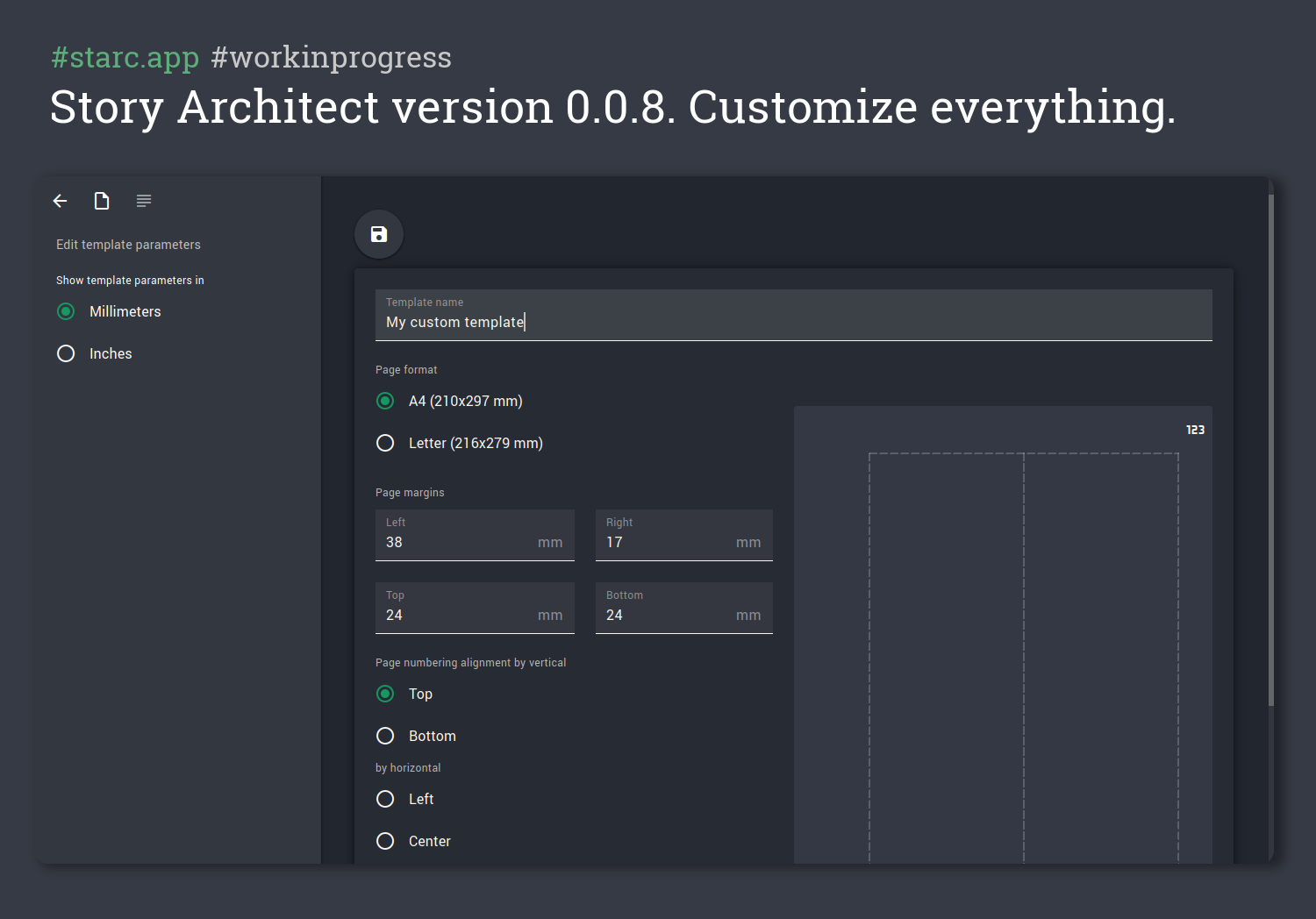 Hi folks, it’s good to talk to you again!

It is today we’re releasing the next Story Architect 0.0.8 beta! It doesn’t include as much as all of us would like to though there is tremendous amount of work behind this release! And so much more to come. It's breathtaking not only from how much work is looming ahead, but from how many cool things that will help you in your creative process!

So, today’s Starc v.0.0.8 has the following features and improvements:
- Added script export to DOCX format;
- Added editing module for the title page (exporting the script together with the title page is coming in the next update);
- Added the feature to set the scene colors (they will be displayed in the navigator, in the script text and on the time line);
- Added a summary report with the script statistics;
- You can now set custom text alignment (using hot keys and context menu) to the text editor, the title page and the script;
- Formatting options added to the text, title page, and script text editors – bold / italic / underline (using hot keys and context menu);
- Added options for spell checking in the context menu - prompts with proposed correction, as well as options to ignore a word and add it to the user's dictionary;
- Spell checker will now work in general in any text field in the app (except for fields like names and titles);
- Added the feature to rename characters and locations in all project scripts (this requires changing the name directly in the character or location editor along with confirmation);
- It is now not possible to create characters and locations without a name;
- Added the feature to create your own design templates for scripts;
- The app is now checking if the selected project is not open in another application copy;
- Improved usability of dialogs and menus - they can now be hidden by pressing Escape or by natively clicking outside the dialog;
- In the interface scaling settings we added an option to return to the original view if needed;
- Options for the editor of simple text documents have been added to the settings;
- Improved Windows installers;
- Fixed an issue with opening project files by double-clicking;
- Fixed an issue with saving the project related to the tagline change;
- Fixed an issue with script structure when copying / pasting text from or into the script text editor;
- Fixed an issue with importing KIT Scenarist files, which caused a crash in some cases;
- Fixed an issue with typing Korean characters;
- Fixed an issue with letter accents input;
- Fixed an issue with exporting remarks scenery (brackets around text);
- Fixed some animation issues when switching between screens for HIDPI screens;
- Many interface elements were adjusted for right-to-left input systems;
- Numerous other fixes and improvements.

We’ve also added a page on the website to send us feedback. So I suggest that right after testing the new build you can go and send us your feedback - it's very important for us!

But in the meantime, let's move on! In the next release we will continue working on the editor functions, import and export, will fix some issues and by all means add something new, like a comics script editor