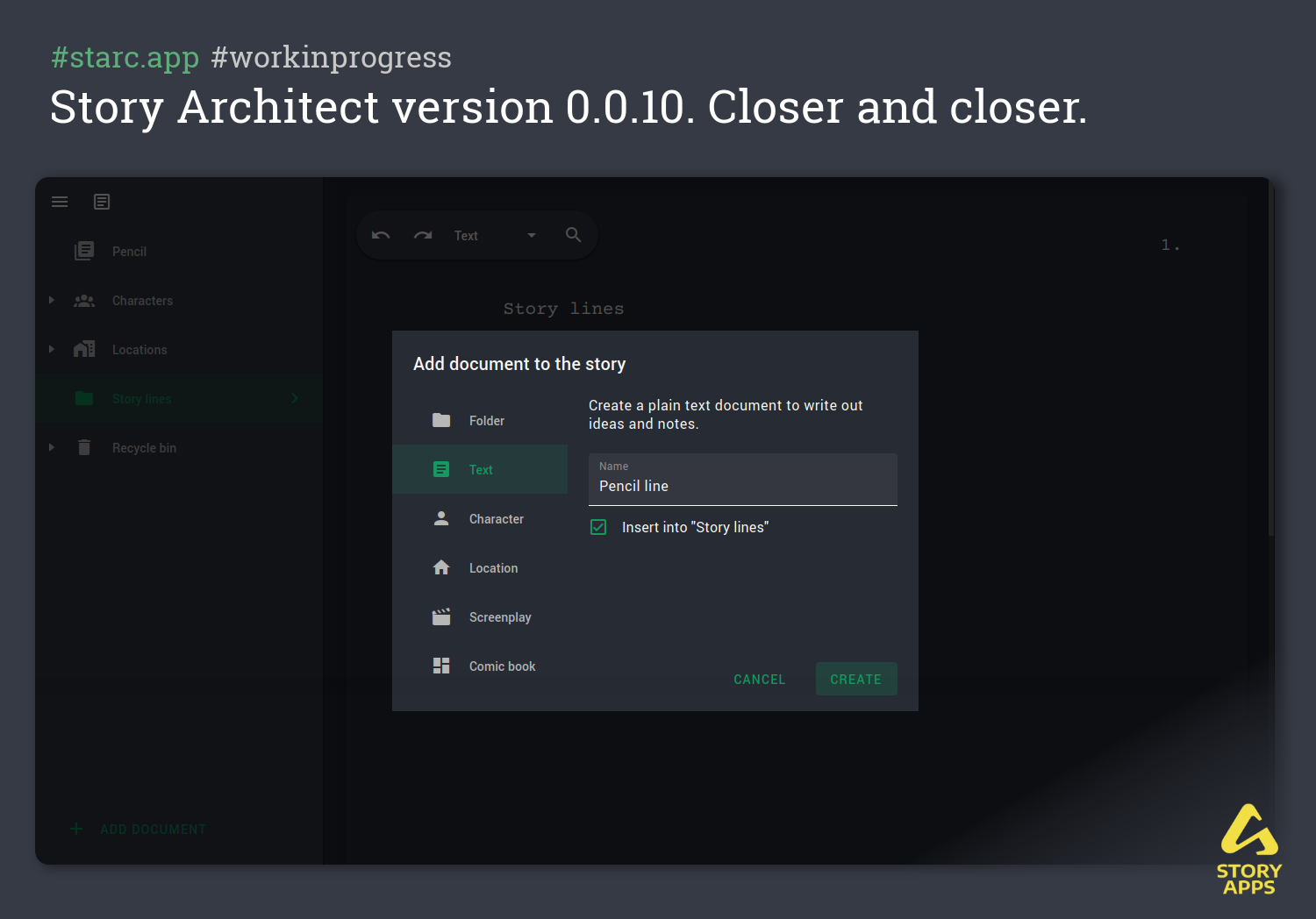 Today we are releasing the next Story Architect’s update 0.0.10, which not only has technical improvements but many useful features for more comfortable work.

In the new version:
- You can now set color for the characters;
- In the character profile you can now specify the age and gender;
- You can use the hotkey Ctrl+N (Command+N for Mac OS X) to create new documents;
- You can now create documents within the current project folder;
- To open the navigator you can now use not only a double click on the document, but also a single click on the navigator’s icon;
- It is now possible to redefine the default settings for a certain script (design template, scene and dialogue parameters);
- The script export dialog has been redesigned and simplified;
- Script export settings are now saved between sessions (except for the scenes list and the watermark) so you won’t need to reconfigure them every time;
- The ability to specify scenes and/or a range of scenes for the export has been added (as a comma-separated list or a range of scenes ‘from-to’);
- Import of documents in DOCX format has been improved;
- Header and footer has been added for the title page;
-  Сharacter colors may now be showed in the Script Editor;
- The context menu for editorial notes has been expanded (you can now edit the comment in the note or join its discussion);
- Removed the restriction on typing several spaces in a row;
- The folder block style was renamed to a ‘group’ to avoid confusion between the project and script folders;
- Hints for those single icon buttons have been added within the app;
- The work of crop tool has been improved (the cropping area can now be stretched to the maximum allowable size with a double click; also, issues with scaling the area around the edges of the cropped image have been fixed);
- Rendering of the popup menu was improved;
- Improved rendering and working of the text fields;
- The issue with disappearing cursor in text editors was fixed;
- The issue with empty bin was fixed (some items were not deleted which caused the application to crash sometimes);
- The style for plain text block has been put back;
- Fixed an issue with dragging characters and locations to the cart;
- Fixed an application freeze when inserting a huge piece of text;
- Fixed an issue with printing brackets for remarks when exporting (in the case when scene numbers are turned off);
- Fixed an issue with deleting the title page, synopsis, script text and statistics from a comic book;
- Fixed an issue with displaying the synopsis document title when navigating through its text;
- Fixed an issue with refreshing the cover of the project on the start page;
- Fixed an issue with displaying dropdown lists in Manjaro Linux.

As you can see, the development doesn’t stop even for a moment :)

We’ve also made a page describing the differences between the free and premium Story Architect versions. You can find it here. If you have any questions please don't hesitate to send them in and we’ll answer them as well as expand the FAQ page.

With the next update the first of the premium features will be released. How do you think which one?

Also, we've moved into an active phase of designing the interface of the Andorid app and we're slowly launching iOS. It's turning out just amazing! Mobile Starc will be full-featured just as its big brother (desktop version).

P.S. Apart from the app improvements we’ve also started working on the web service, which will have an API for working with the uploaded data. For example, the system can take a list of episodes and pull all the characters, their age (of course, if it's specified in the script or in the project itself); a list of scenes for each character in all the episodes and even generate a PDF document with the text of a particular scene. So, if you're making a product or platform which would benefit from this kind of data please get in touch – we know how to get it ;)

See you guys soon! Follow us on social media, we’re posting some backstage from the development process of the next release. And of course please send all your comments, wishes, ideas and congratulations to us as we always read them with great pleasure!