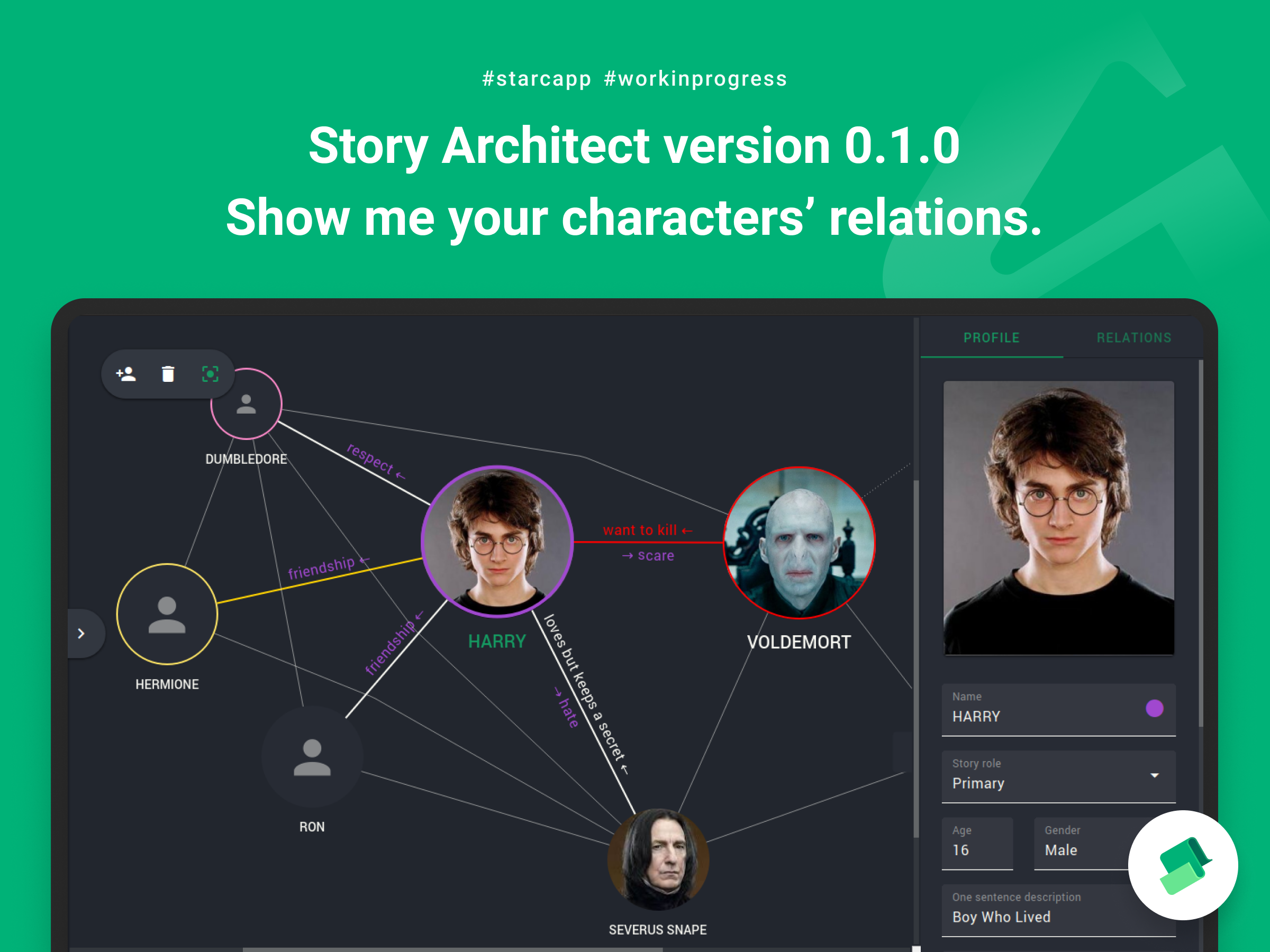 The coolest news for you - today we are releasing beta version of Story Architect 0.1.0 for everyone!

During the last month, we have been actively involved in making the current version stable. Meanwhile, have added some new features so hope you’ll like them too!

Let's see what we have for you in this release:

The relationship editor module has created a great commotion! We’ve received a huge amount of feedback from you with suggestions for improvements and bug fixes. Thank you so much, guys! We're reporting back on the work we've done on that side:

Some improvements have also been made for other modules:

- Added the ability to set the preferred project type for new projects, so that the app can automatically create for you a set of documents needed to start working on the project;
- You can now export scripts into FDX and fountain formats;
- Added the feature to disable the page mode for text editors (Settings - Application Settings - Text Editing - Display Document Page Scenes);
- Added an option to disable automatic continuation of character lines (Settings - Components - Script - Automatically continue character lines)
- You can now configure hotkeys for the script editor (Settings - Hotkeys);
- Replacement of character names is now done not only directly in the blocks of characters names and scene participants, but also in the action description and other paragraphs, where it is possible to find a full match for the name being replaced;
- Added an option to format text as strikethrough (located inside the context menu for the selected text part);
- Line breaks in the project description are now possible so that you can more conveniently design the start page with the list of projects;
- If you have a lifetime subscription to the PRO version this will now be displayed in your personal account;
- Brought back information about the version number in the main menu;
- A paragraph of text will now be highlighted correctly when you triple-click on it;
- Now when you add characters or locations through the context menu, the app will automatically select the right one from the list of documents;
- You can now find all characters and locations from all scenarios of the project (you can do this with the context menu item "Characters" or "Locations");
- The app now remembers the path to the folder from which you selected images last time so next time you will be offered to start searching for images from there;
- Fixed an issue with displaying the characters restored from the bin in the dropdown lists in the script;
- Fixed an issue with the app freezing when replacing types like "hero" -> "superhero";
- Fixed an issue with inability to completely remove the sidebar when the app is expanded to the full screen;
- Fixed text correction when changing the name of the character who continued a line;
- Fixed an issue with pasting text from the clipboard to the beginning of a paragraph;
- Fixed an issue with saving text style pasted into an empty paragraph;
- Fixed an issue with resetting paragraph formatting when deleting a previous paragraph;
- An issue with rendering Đ symbol in Courier Prime font has been fixed;
- Lots of other small errors, slow reactions and other bugs in the app’s interface have been fixed.

You are all very welcome to download, try and share your impressions with us! And we’ll try to release a new even more stable & even faster and more functional version as soon as possible!

Have a great start of the year.