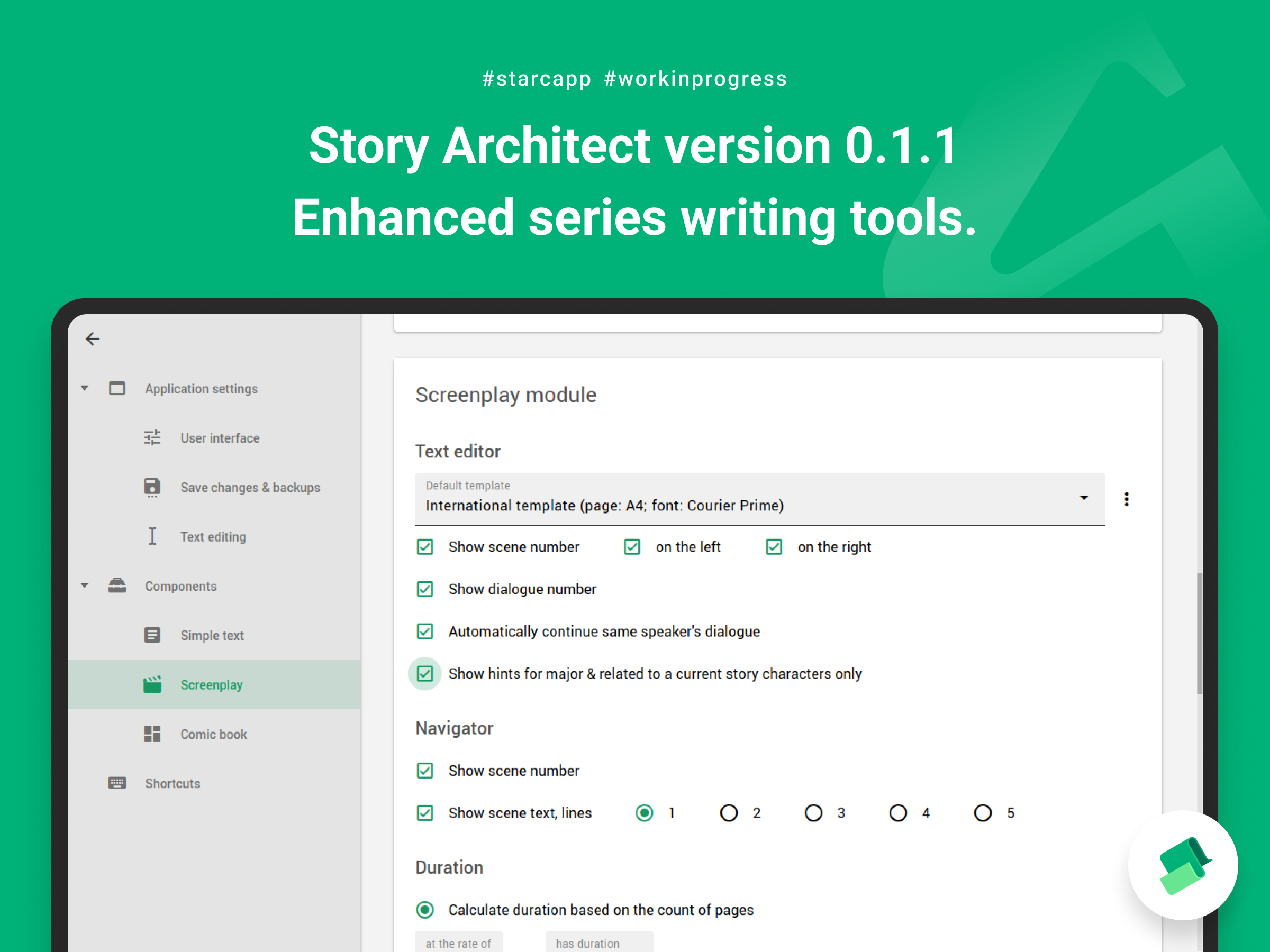 Dear friends, I’m so happy to welcome you all again because we have a new version of Story Architect 0.1.1 ready for your attention!

It includes a lot of technical improvements. But it ain’t all so let's have a quick look at what has been done in the 30 days since the last release:

- Added a mechanism to collect information about an app crash (crash data will be sent only with your consent);
- Added an indicator of a broken connection with the server (of course the app will activate the automatic reconnection);
- Added offline authorization, so that even if you don’t have a connection you can have access to all the features of the program that are included in your plan;
- The app now saves the position and scale of the characters relations diagram area and restores it at the next opening;
- The project information editor has been redesigned;
- The app’s theme selection was redesigned;
- The new editor for customizing your own app theme was implemented;
- In the custom theme, you can now set a separate color for the background and the text;
- Improved behavior of the UPPERCASE algorithm in case you want to write a word in a tOGGLe CASe;
- You can now set the HEX color code in the color palette;
- It is now possible to customize the title page for a custom script design template;
- The app now offers to save unsaved changes when editing the design template;
- Added options to save the custom design as a file and load it;
- Fixed an issue with overlaying the text of the main menu items and their hotkeys;
- Fixed an issue with moving the character relationship canvas via the middle mouse button;
- Fixed an issue with saving characters location on the relationship chart;
- Fixed the link address for the translators of the app’s interface;
- Fixed an issue with displaying dropdown lists near the bottom edge of the screen;
- Fixed an issue with resetting text format in some cases when editing double dialogs;
- Fixed a crash when pasting text from the clipboard into the script editor;
- Fixed an issue with saving a custom script design template;
- Fixed a crash when loading spelling dictionaries in some cases;
- Fixed an issue with setting hotkeys when user interface translation other than English is set;
- Fixed installation package for 32 bit Windows version;
- Fixed an interface twitching when changing theme/application interface size.

There is one innovation I'd like to additionally draw your attention to so that it doesn't get lost in the general list. In your feedback, you’ve paid extra attention to the ability to create multiple episodes in one project. Namely, the fact that this feature makes it difficult to work with drop-down lists of characters because all the characters from all the series get there... We didn't give up and promised to come up with something to solve this problem, and now with the current update, you have the ability to configure the display of tooltips so that they display only important characters (those for which you have set the "Story role" parameter) and characters involved in the current script. Voila! Now your projects can have hundreds of series and you can still work with character lists as conveniently as if the series were just one script! You can enable this option in Settings - Components - Screenplay.

Beta continues and our team is accelerating! For the next release, we’ll have a new module - the episode text editor. Plus we’ll finalize the script editor and fix all the known bugs in it.

Thank you all for your attention, now feel free to download the new version, and good luck with your projects!

P.S. As always, we are eager to hear stories about using STARC. Share your thoughts and tell us what you like and what you don't like. We won't leave a single request unanswered - we'll discuss everything and think together about how we can make the app better!

P.P.S. Don't forget to subscribe to our social networks - that's where you can find out what's going on in between releases. And of course feel free to share the news with your friends, let them join too! :)