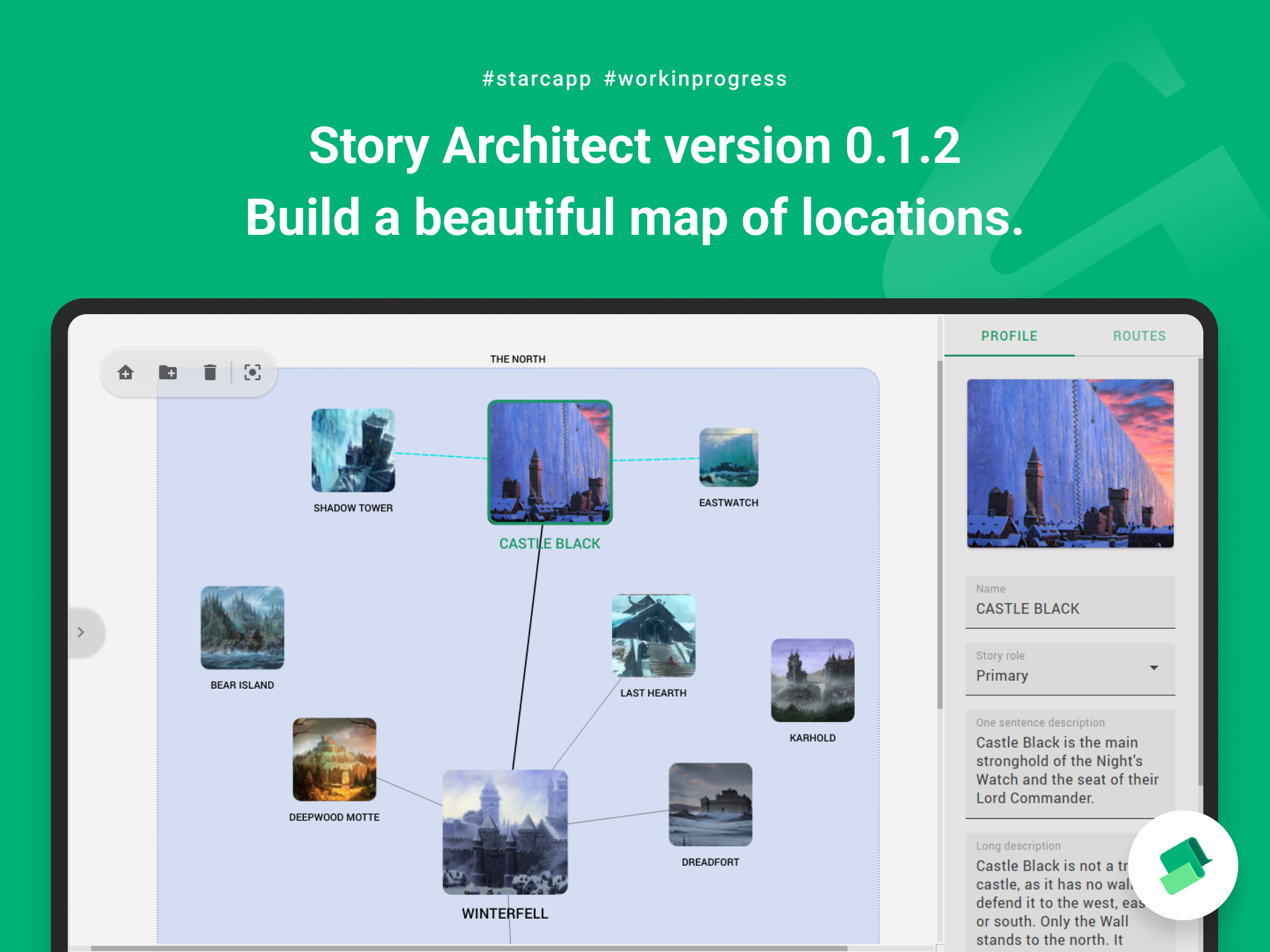 It is the release date of Story Architect 0.1.2.

This release doesn’t include the treatment editor for a number of reasons so this module has been moved to the next version. Even so, we have a few cool features for you that many of you might like.

Here you can lay out the location cards of your story on a virtual canvas, build routes between them and group them in a way that suits you.

To activate the location map you need to select the parent location section.

We've added the ability to motivate yourself and share the results of your progress toward your goal.

You will find a timer icon in the main menu near your avatar. Clicking on it activates the ability to start a sprint - set the time and go. While the clock is ticking, you can see a filling line on top of the workspace that shows the amount of elapsed and remaining sprint time, and all the words you have entered will be counted and shown at the end of the sprint.

Story Architect 0.1.2 also includes the following changes and fixes:
- Added the option to create groups in the Character Relationship Editor;
- Added the ability to align the text width, both for a particular paragraph (via the context menu) and for the style of the block in the template editor of the script;
- Refined the appearance of toolbars so that they do not distract attention;
- Speed of the app was considerably optimized:
-- when opening the project
-- when selecting different documents inside the project
-- editing text documents
-- deleting large blocks of text
-- undoing the last action after modifying big text blocks
-- when turning on / off /changing spellings dictionaries
- Improved fading effect of adjacent blocks in focus mode;
- Improved cursor positioning when clicking on empty section of page;
- Interaction with the dropdown help lists when typing the script text has been improved;
- Fixed a lot of issues with undoing the last action, which appeared in different situations when working with the text;
- Fixed an issue with rendering brackets in the remarks for languages that are written from right to left;
- Fixed an issue with the cursor jumping to the previous scene in some cases;
- Fixed an issue with pasting the text from the clipboard in double dialogs;
- Fixed an issue with spell checking during dictionary changes;
- Fixed an issue with closing conversations with Esc button;
- Fixed an issue with loading mixed theme colors after application restart;
- Fixed an issue with extra blank lines when pasting text into the text editor;
- An issue with the page layout in the comic book editor was fixed;
- Incorrect script structure when inserting text in some situations has been fixed;
- lots of small and less noticeable changes to the appearance and usability of the app.

I wish you peace and that creativity won’t leave your life for a minute.