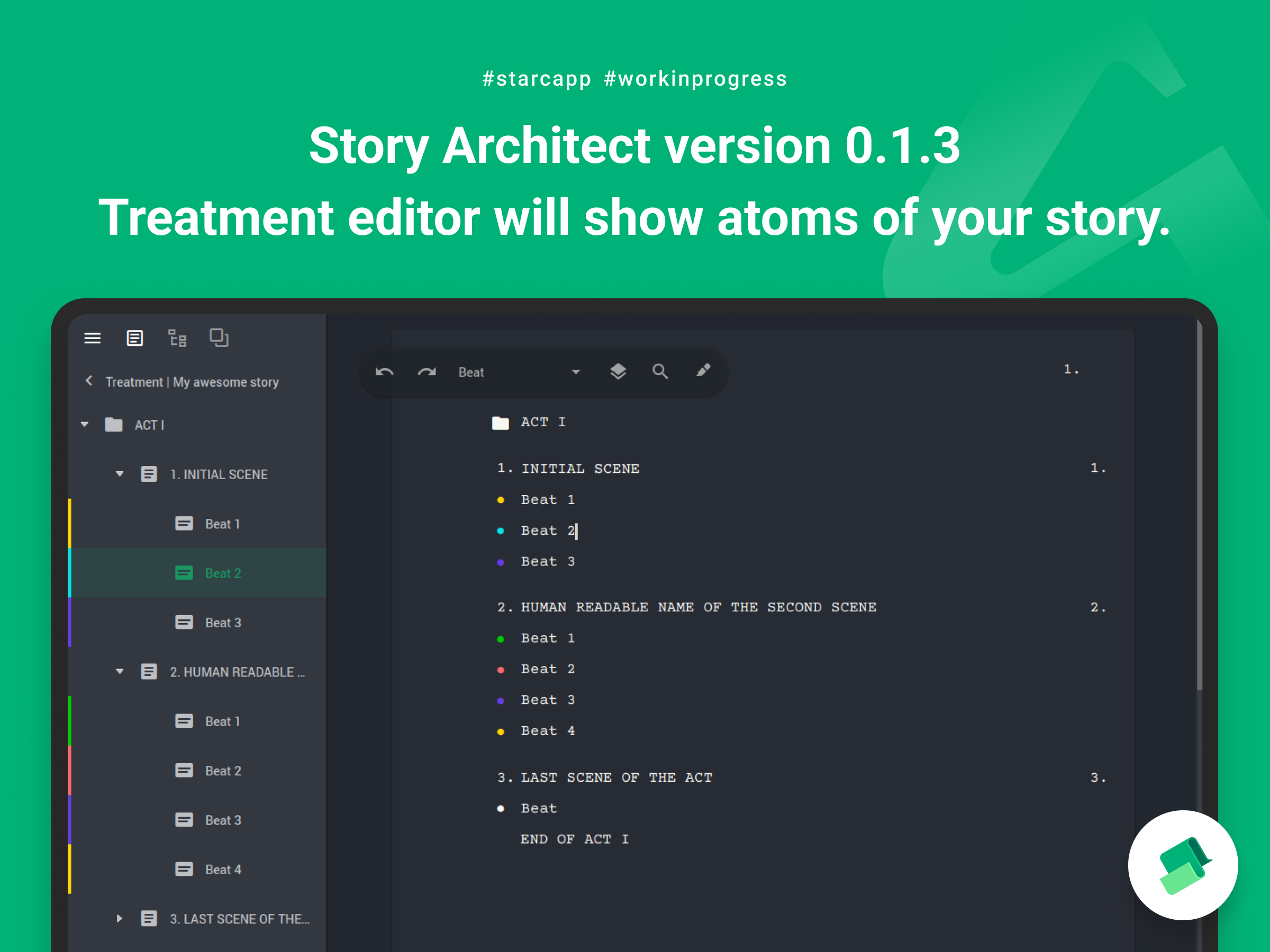 Today is the new release of Story Architect 0.1.3!

This has been a powerful technical sprint for our team. A very large part of the back-end has been overhauled, simplified and made more versatile. In the future, this will allow for more rapid troubleshooting of all text editors, and in this release it has already helped with the implementation of the treatment editor module along with comments function to the plain text editor module.

The ability to work with the treatment text was the main goal of the current update. And we feel it has been achieved! Let's look at what this beast is and how it should be tamed.

We understand that the term may have many definitions and everyone puts a little bit of himself (or his producer) into it, so in order to work with the text of this document we have described several ways to work with it.

So, the ‘treatment’, in the ideology of Story Architect, is the initial version of the script, or, if you like, its plan. This is where the author lays out his story into acts, sequences, divides them into scenes, and splits them into beats. The beat here is the smallest unit and the atom of the story, the moment within which some event or action occurs. And that's exactly what Story Architect allows you to do.

You can assign colors to the beats, rearrange them, and thus develop and improve the structure of your story. In this case in the script itself a beat can correspond to a single paragraph of action description, as well as character dialogue and even the text of an entire scene.

For convenience, the beginning of each beat is marked with a colored circle in the script text, so that the author can clearly see the borders of the atoms of his story and manage them. Besides, in the script text navigator you can turn on the display of the text of the current beat where the cursor is set (in the upper right corner of the navigator you will find an icon in the form of three vertical dots and inside there is on/off button for that).

If you prefer to work in the style of one beat per scene (when the entire scene description fits into one paragraph), you can turn off the display of beats in the script navigator settings (Settings - Components - Screenplay - Navigator - Show beats) to avoid duplicating scene descriptions and use the navigator screen space more efficiently.

Seems like it turned out pretty cool so make sure to give it a try! And please share your feedback how we can improve / refine this editor to make your work even more easy and productive!

In this month we’ve become friends with Karel Segers (check out his courses) and made a logline generator together. Of course, it's not a full-fledged generator that does everything for you, but rather your assistant who asks the right questions and helps you make a rough draft of a logline. It has turned out super cool and it was a great pleasure to work on it!

You can launch the generator by clicking on the button in the logline field of the script or comic book parameters.

In this update we've also added the feature to create and manage bookmarks in the script text. Using the new context menu item in the script editor, you can add bookmarks, edit them, and display or hide their list.

In addition to displaying the bookmarks in the script text, you can also see them on the timeline, which allows you to use them not only as "not to forget" bookmarks, but also as visual markers to improve your navigation within the script.

Now let's get to the dessert :)

We've added automatic daily builds published on the website. This means you (if you're brave enough) can be on the cutting edge of app’s development and get fresh versions before they're publicly released. These versions may of course include new bugs, but who cares, right? :D

So dear friends, if you’d like to be among the first, then please subscribe to our updates on GitHub (this is where the source code of the program is kept) and in about 30 minutes after each change you will get the updated version of the app on downloads page (see "Developers Version").

In addition, version 0.1.3 includes many other improvements:
- You can now customize the appearance of the beat style in the script;
- Added the feature to display the text of the current beat when working with the script text;
- Added an option to display / hide beats in the script structure;
- Added notes in the editor of simple text documents;
- Added the app info dialog window;
- Added the display of the translation progress of the app’s interface;
- You can now scroll through the tabs using the mouse wheel / trackpad;
- Improved rendering of "enabled" context menu items;
- Improved rendering of information about the number of text notes and editorial comments in the text navigator;
- Some minor improvements to the focus mode (now the outermost blocks are not completely darkened to be able to distinguish the text, and fixed the problem with fading when the cursor was in the text of a double dialog);
- Long text in search and replacement panel text boxes is now displayed correctly (and does not break panels);
- Fixed an issue with updating the color of the icon of the character and location group selection button;
- Fixed an issue with the comic structure formation when changing page <-> panel blocks, as well as when moving them;
- Fixed an issue with the correct definition of the text under the cursor, when calling the context menu;
- Fixed an issue with scene numbers rendering on the right side;
- Fixed an issue with additional processing at the project start (in large projects it might’ve led to app’s freeze at some time after start);
- The issue with red color rendering of some interface elements (drop-down list of styles in the Script Editor and scene color selection in the context menu) was fixed;
- Fixed an issue with updating the start / stop button icon of the writer's sprint;
- Some issues related to the app’s crush were fixed:
-- when pasting text from the clipboard;
-- when rendering the timeline after deleting all the text in the script;
-- when drawing the shadows of the options cards (previously, these shadows were drawn using a very resource-intensive process but it has been greatly optimized);
-- on exiting the app in some cases;
- Adjusted the set of libraries included in the installation package for Windows, so the application can now run on all PCs without installing additional system components.

Here I am inviting you all to go ahead and meet the adventures! Download the new version and share your thoughts with us :)