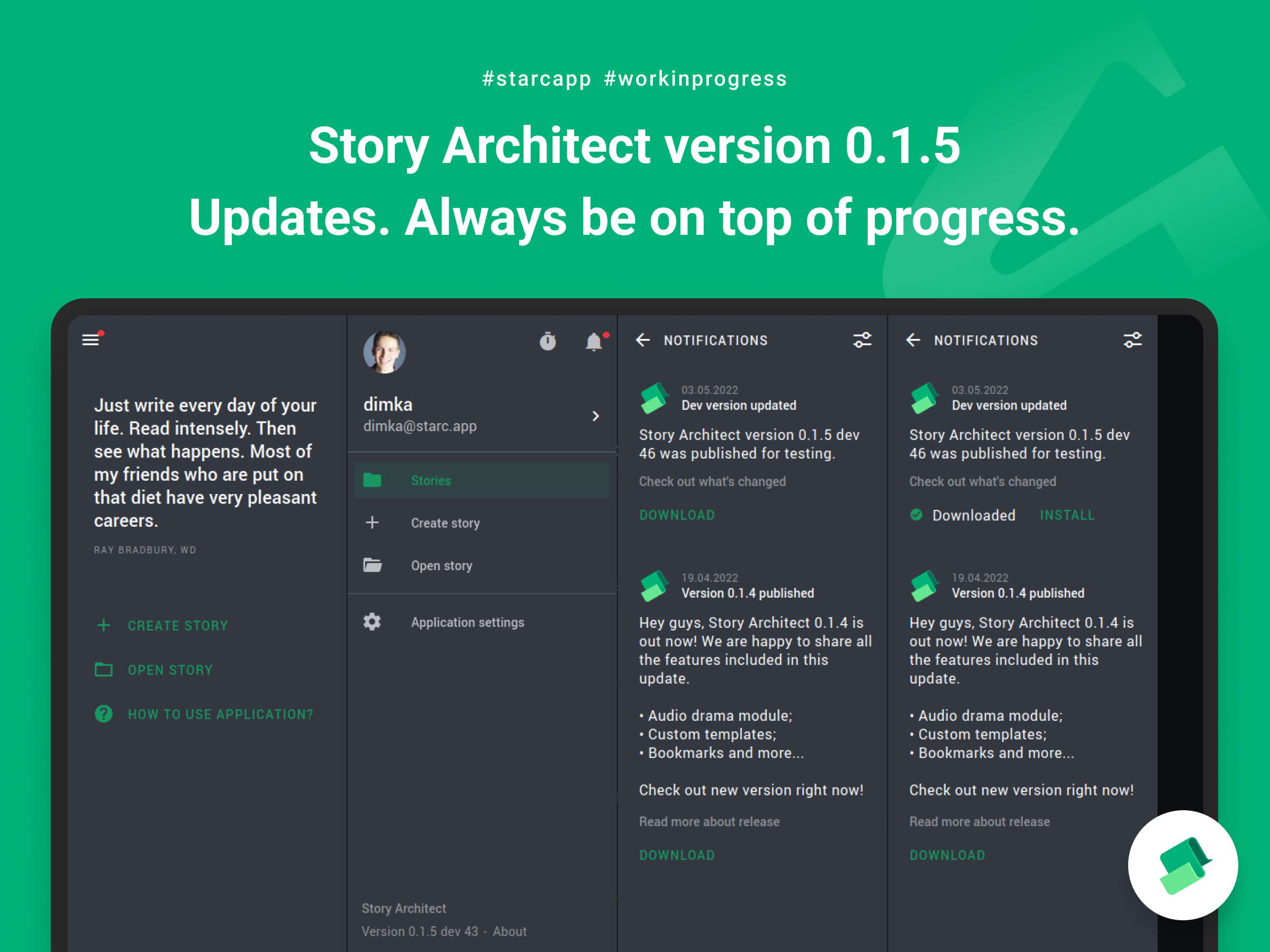 Story Architect 0.1.5 is out today! The main goal was fixing some issues in the app, as well as updating various tools for different text editors. Of course, we have a couple of innovations that you’ll definitely like :)

The most significant innovation of this release is the notification bar. There you can find information about published updates, though not just about user builds but versions for developers as well.

Directly from this bar you’ll be able to download and install updates, so you don’t have to look for a link to the latest version on the website every time.

Automatically, the display of the dev-versions is disabled, so if you want to keep and updated version of STARC at all times you can enable them in the notification bar settings (you can find the settings display button in the upper right corner of the bar).

Another important innovation of version 0.1.5 is the ability to control script guides. The Guides are lists with helpful phrases that appear when working with the script text, such as:
- scene intros;
- scene times;
- character extensions;
- transitions.

You can add, modify or delete these Guides and therefore change the appearing lists. To do so, please use the three dot icon in the upper right corner of the script navigator.

Update of functions of the text editors

In this update, we’ve finally managed to synchronize all additional functions of all text editors within the app.

This means that you can use bookmarks, review mode, set colors for chapters and scenes not just in the script editor but in the editor of the play, comics and even in a basic text editor.

Also, the comic book editor now has the ability to redefine the system settings of the template used, etc. for specific comics. The export dialog has also been simplified.

And here’s the cherry on top - a small tool to help you come up with the name of a new character!

When adding a new character, in the input field of his name you’ll find a dice icon, by clicking on which Story Architect will come up with a name for you. And if you right-click on this icon, a secondary context menu will be displayed, where you can configure some parameters for selecting names.

And while you download and try out the new version we’re getting back to fixing and making new stuff to improve your life as a writer. We’re all getting closer and closer to our goal of creating the best digital assistant for storytellers!

See you soon! And thank you for your participation. I'll never get tired of thanking you. After all, it's super pleasant! Thank you very-very-very much!