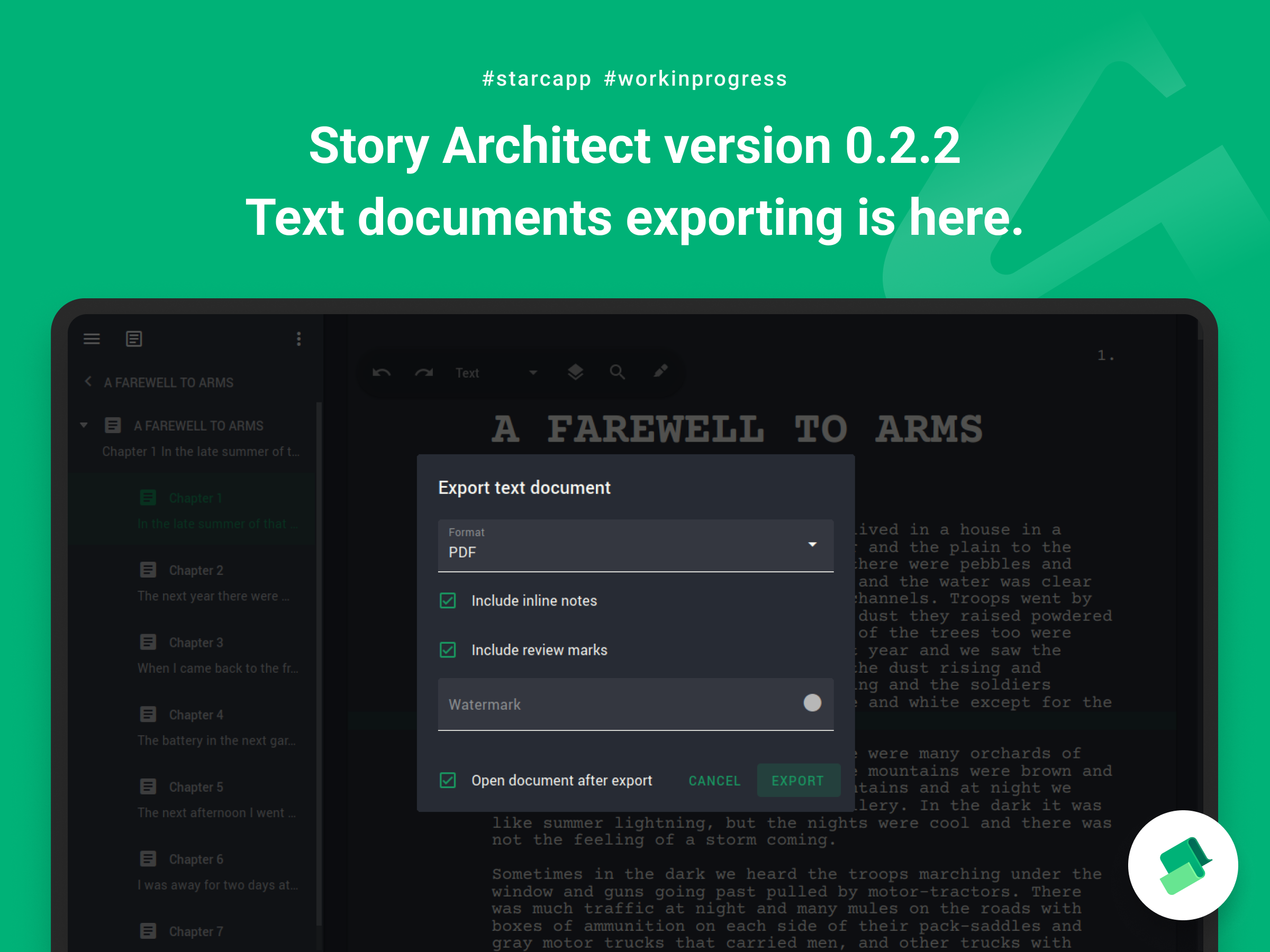 Another sprint is behind us, so I’d like to tell you about the improvements we’ve made in the new Story Architect version 0.2.2.

We were surprised to find out that many authors have started using STARC to work on prose genres (even though there are no specialized tools for that yet), creating and working with text documents in a project.

As it would’ve been wrong to ignore this point, the new version includes the ability to export text documents in PDF and DOCX formats.

This is a fascinating part of the project in which our team has little experience, so if you have any ideas or suggestions about features that would be useful for authors of novels (novellas and any other formats), please share them! We'd be very happy to discuss and think together how to bring them to life.

In this sprint, the main goal was to create a tool to control document versions. Now you can create a limitless number of versions of text documents. As an author, you might need this feature for the two most common cases:

1. To keep a script state at a particular point in time and always be able to go back to exactly the same state as it was. These are so called ‘drafts’ - versions of the document without the possibility of further modification;
2. To experiment with the text if you want to change it drastically.

You can create a new version using the corresponding context menu item (right-click on a text document, synopsis or script - "Create a new version"). For each version, you can customize the name, color, and whether the version is editable or read-only.

You can also show or hide a switch of a document’s version list. To do this, open the options' menu of the current document (three vertical dots in the upper right corner of the navigator) and specify whether you want it to be displayed.

Also in this update, you can find an amazing new feature - the ability to generate a random photo for a character. We’ve even recorded a screencast while building it and invite you to witness this process.

The generator can only use information about a character's gender for now, but in the future we want to improve it, so it’d take the character's age into account.

You can generate a photo of the character both in the editor of a character’s parameters and in the relationship editor. Do it by right-clicking on the character photo selection area and choose "generate".

Yep, here it is :) The closer we get to the full stable version, the more we will attract partners and organize various promotions. That's why, starting from the current version, there is an option to activate a promo code in your account.

In addition, we’ve added a system of custom timing for the script, as well as fixed a lot of small cannot-be-described-in-human-language problems :)

Now everything is ready to create a cloud service, the next step is to make it happen. The following sprint will be totally devoted to the ability to synchronize projects between different devices and edit them together with co-authors in real time.