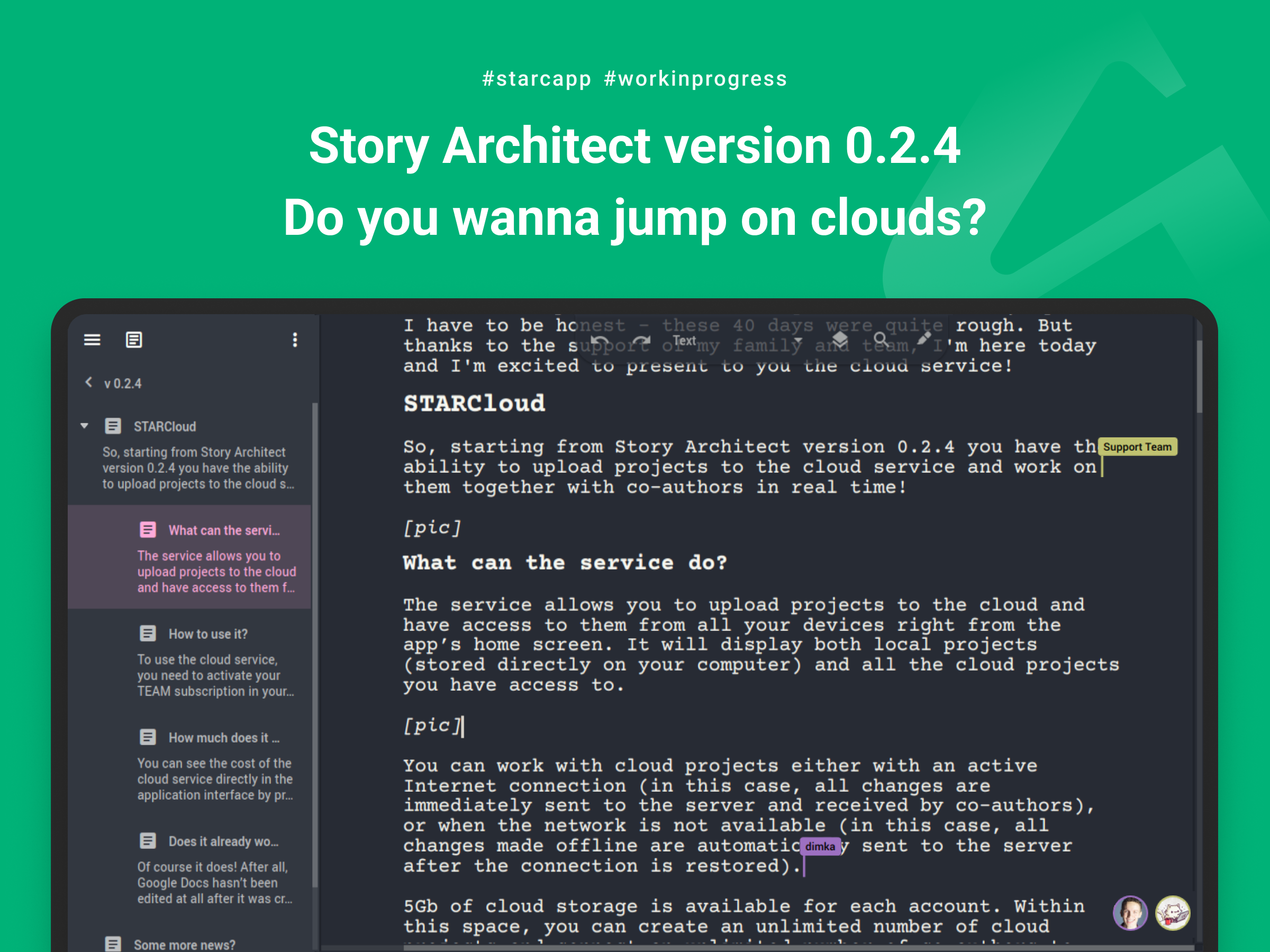 I have to be honest - these 40 days were quite rough. But thanks to the support of my family and team, I'm here today and I'm excited to present to you the cloud service!

So, starting from Story Architect version 0.2.4 you have the ability to upload projects to the cloud service and work on them together with co-authors in real time!

What can the service do?

The service allows you to upload projects to the cloud and have access to them from all your devices right from the app’s home screen. It will display both local projects (stored directly on your computer) and all the cloud projects you have access to.

How to use it?

After you activate the TEAM subscription, you can create new stories in the cloud - the switch will appear in the Create New Story dialog box, where you can set the location of the new project.

In the same module you can delete co-authors or change their role in the project using the context menu by right-clicking on the line with the desired account.

To delete a project from the cloud, you need to call the story context menu on the start screen and select the corresponding item in the menu that appears.

How much does it cost?

You can see the cost of the cloud service directly in the application interface by pressing the "Renew" button in your personal cabinet.

If you are a happy owner of the lifetime PRO version, you will have a permanent 20% discount on the TEAM subscription price.

Answering the popular question “Do all co-authors need a subscription?” - a subscription to the TEAM version is required if you want to host your project in the cloud yourself. If you work with someone else's project as a co-author, then you can use any version of the app to access it. The only caveat is that you will only be able to edit those modules of the project that are included in your current license.

Does it already work as stable as Google Docs?

Of course it does! After all, Google Docs hasn’t been edited at all after it was created in a month by one engineer :)

But seriously, you have to keep in mind that this is the very first version of the service and all sorts of problems may occur while using it. If you run into any problem, we will be happy to solve your case and fix it as soon as possible.

The next release will include fixes for all the bugs found on the cloud service, as well as one new module. And it will be nothing less than a corkboard with cards!

Download the new version, share your projects with co-authors and send us your feedback and warm smiles :)