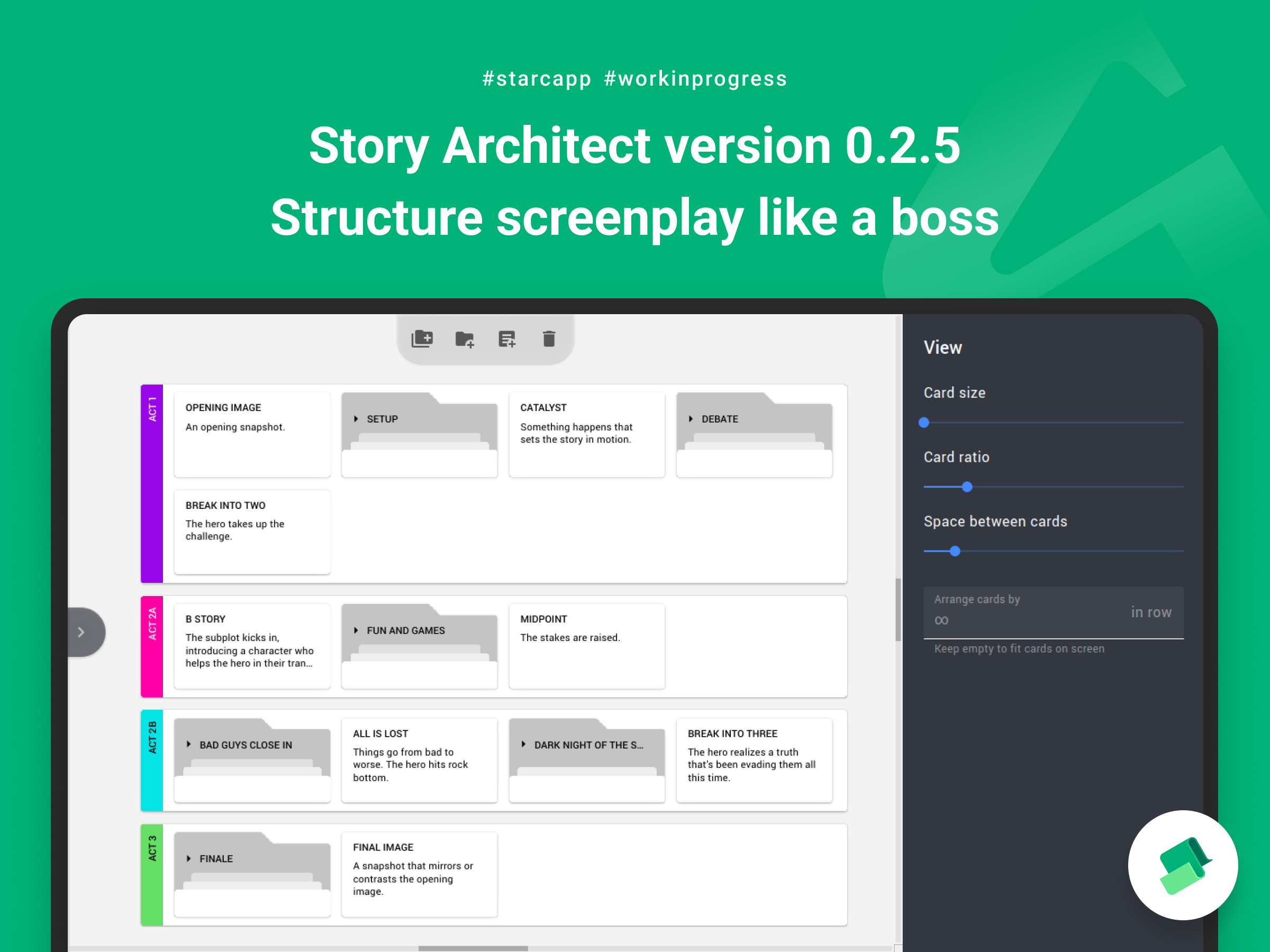 Here comes a new and very long-awaited update! Story Architect 0.2.5 with a virtual corkboard is longing for your scripts!

Now you can get a bird's-eye view of your script and rearrange scenes, sequences, and even acts to experiment with the structure of your story.

How do you open them?

The cards are in the same place as the script itself. Open your project, go to the script panel, and at the top of the project navigator to the right of the menu – there you'll have the option to switch between the text view of the script and its cards.

How do you work with them?

The working process with cards is as simple as possible - just take a card and carry it to the desired place within the cards. The other cards will automatically rearrange themselves depending on the new location of the card you are dragging.

In addition, scene cards and scene groups can be inserted into acts and other groups.

When you select a particular card, you can edit the parameters of the selected scene, sequence or act in the right panel.

And if you deselect them all, you can customize their appearance: size, aspect ratio, distance between the cards, as well as specify a fixed number of cards in a row, or leave it empty, allowing the app to occupy the entire working area of the screen.

You can also scale up or down the cards in the standard way for your operating system (with Ctrl+ and Ctrl-, or by holding down Ctrl and twisting the mouse scroll for Windows/Linux; with Command+ and Command-, or the trackpad pinch gesture for macOS).

How to try it?

The card module is available in PRO and TEAM versions, so if you haven't had a chance to try it yet, or if you've already tried it but want more, catch the promo code with a 15% discount to buy any version of the app - ILOVECARDS. The code expires on October 15.

The main innovation of the next release will be the statistics module, so both statistical reports and graphical visualization of the script contents will be added to the app. In addition, we plan to expand the capabilities of the cards module – will add the feature to specify card tags and the ability to place them in columns.

Glad to share the new release with you! I hope you've been waiting for it too. I wish you good mood and fruitful weekends! :)