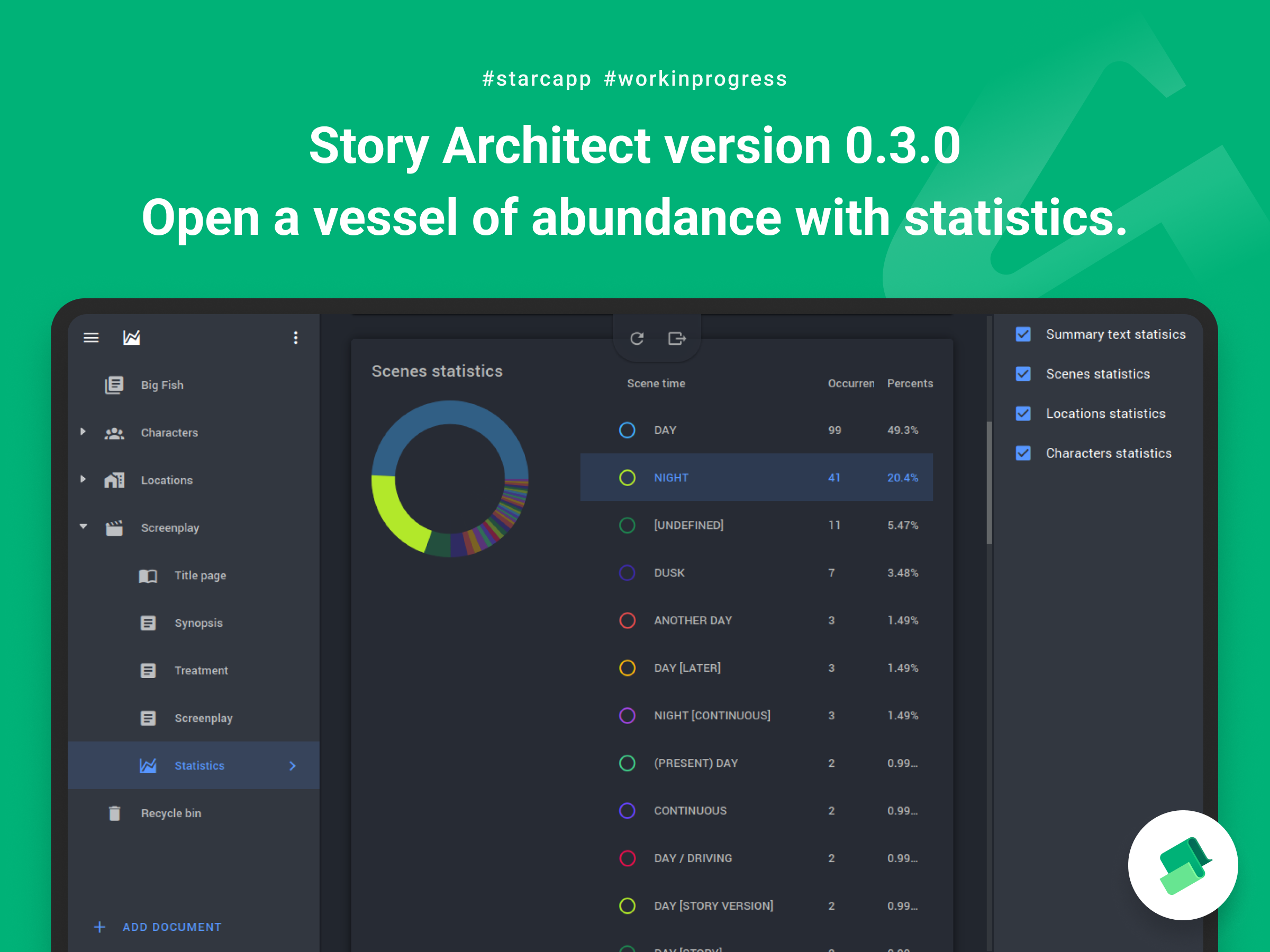 It’s time for the Story Architect 0.3.0 release and I am in such a festive mood again!

In fact, every release we do is a little holiday. And we arrange it for you, gifts and good mood guaranteed ;)

The major innovation of version 0.3.0 is the script statistics module.

From now on, you have many more options for analyzing and controlling your scripts. You can open it as usual by double-clicking on the statistics item in the project navigator, or by clicking exactly on the arrow that is drawn on it.

Story Architect is able to collect a variety of project stats. These are the basic ones:
- Script summary
- A list of scenes and its extended version with the characters of each scene (as well as notes on the number of character lines and their first appearance)
- A list of locations and an expanded version with a grouping of scenes by time of action and details of each scene
- Statistics on characters, showing the occupancy of characters and the number of their lines in the script.
- Also, a new, but now almost industry-standard report with a gender analysis

In addition to simply viewing the reports, you can save all project information as an Excel file, which allows you to use these statistics even outside of the application.

In addition to statistical reports, STARC now has the ability to visualize your script in the form of graphs.

A structural analysis of the story clearly shows the ratios of cue duration and action in each scene, as well as the quantitative characteristics of the characters.

And the character activity graph will show which characters and in which scene appear in your script at the same time.

As promised, in this release we have expanded the capabilities of the script cards module. Now they can be arranged in columns. Each act forms a new column and, of course, cards, as well as acts can be rearranged on the board.

To activate the column layout for cards, you just need to select the appropriate icon in the upper right corner of the sidebar of the card appearance settings.

Also, you can now add tags for each card.

Whoa, that was powerful!

I want to express my tremendous support to everyone for your participation and endless faith in our joint project! Thank you guys!

What's next? Next, we're planning a release to improve stability and fix a few little things. But don't worry, we will by no means leave you without presents by the time the next version comes out! ;)