This is the tenth month of this incredible sprint... For three hundred days, we've been trying to put out an update every 15 days. Whether in time, or delayed, but steadily moving forward. And today we're releasing the 17th Story Architect release in 2022, version 0.3.3.

What's my point? I'm just a little tired of the pace. Of course, I really want to give you all the features we've planned as soon as possible, but fairly, there are so many of them that I'd probably need another year to live at the same pace to create all that we've sketched and designed :)

And in order to be well prepared for the new sprint it's time to take a little time out, to reflect on what has happened to us lately. To breathe out, to look at the results and to plan another strong year, which will bring us closer to the dream, which is the best software for authors.

I want to say a huge thank you to all of you. Thank you for your support, for your criticism, for your kicks and for your kind words! Thank you for every word you said to us! The fact that we have you - users who care about the project - indicates that we are on the right track. Thank you, guys and gals!

I also want to send hugs to our entire team. Boris, Michael, Polina, Polly, Slava, thank you! We are definitely creating something great and I'm very happy to have your company! Thank you for your hard work and your creativity!

Oh, feels so good to be thankful :)

And now, let's go back to the update and see what Story Architect 0.3.3 is bringing us!

In version 0.3.3 we have made a lot of features for working with scene numbers.

Yes, now if your script has gone into production, scene numbers can be locked so that newly added scenes don't throw off the old numbering.

You can lock scene numbers in the scene parameters section. Here you can lock them again, after changing the subsequent accepted drafts, as well as unlock them if necessary.

To configure it, you need to enter the scene number template in the corresponding field.

CAUTION: the scene number itself in the template must be specified as a # symbol, otherwise the numbers will not be displayed in the script.

By default, the program uses the scene number template with a dot after the number, which looks like this

If you want to have only numbers, you can remove the dot at the end of the template, or if you want to give numbers a prefix as a series number and leave a dot at the end, such a template will look like this (for the fifth series)

Try to experiment! If necessary, you can always reset the scene number template to the default by using the corresponding button inside the template text box.

In addition to all the features above, starting from version 0.3.3, you can also set scenes to their own numbers (regardless of whether scene numbers are locked or not).

In order to give a scene its own number, you need to open the scene parameter panel. You can do this by selecting the appropriate option item in the Navigator (three dots in the upper right corner of the Navigator) of the script editor, and in the card editor, by selecting the desired scene card. 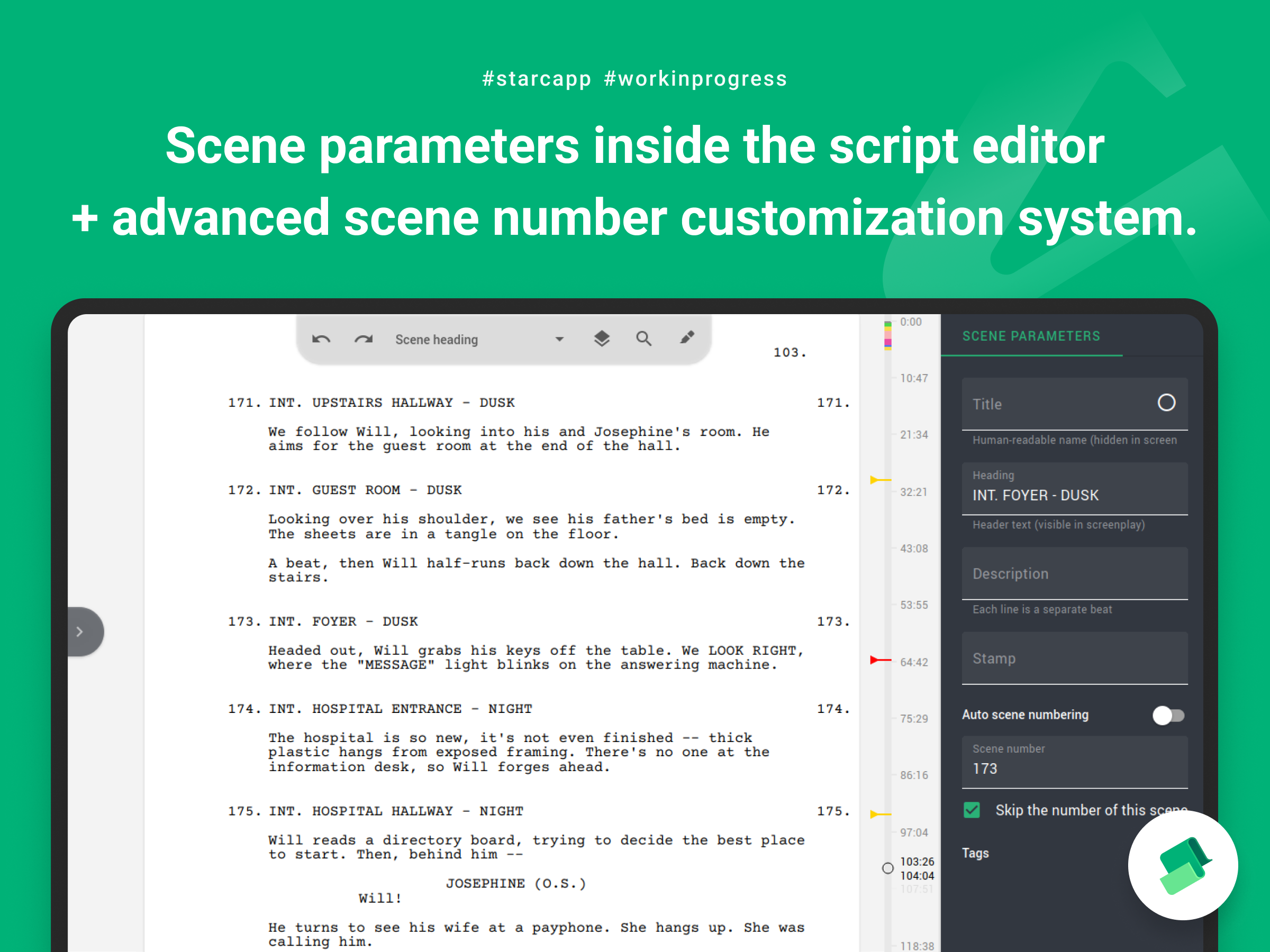 Next, you need to uncheck the switch from automatic scene numbering mode and you'll see a field to set the number and an additional checkbox that allows you to skip the logical scene number. It sounds complicated, but it works very simply :)

If you specify the need to "skip scene number" which comes third in your script, the program counts the next scene as third (rather than fourth, as it should be if you count them in order).

And another innovation of the new version is the display of script counters in the navigator. 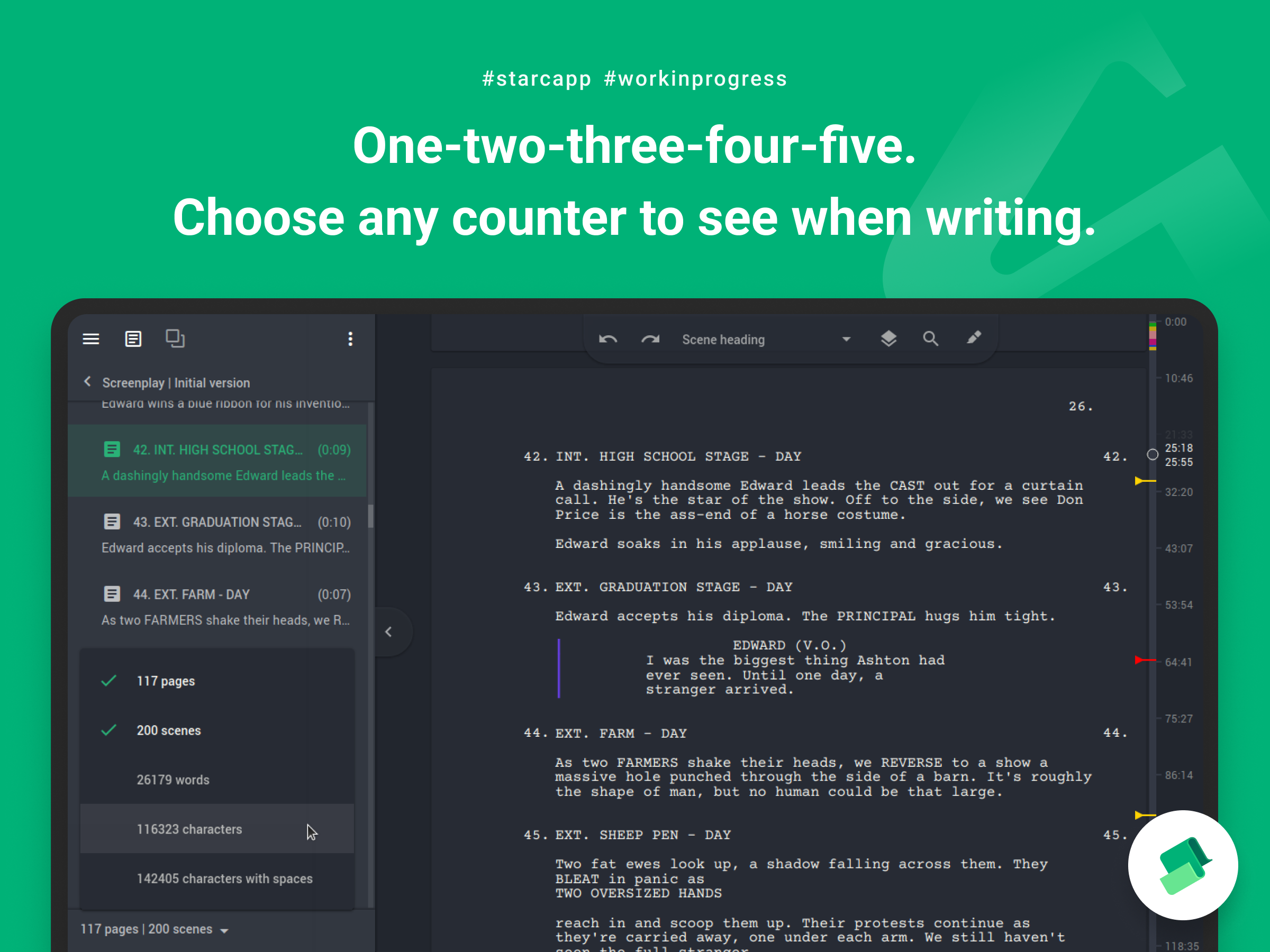 In order to see a summary of the number of pages, scenes, words and characters in your script, you just need to open the script navigator (you can do so by double-clicking on the script text document or on the right arrow icon located on it), and you will see a line with this info at the bottom.

To choose which counters you want to see, click on the line with the information and select available counters in a drop-down menu.

And finally, some last but not the least improvements:

That's how Story Architect 0.3.3 has been released and I think we will make our next update just in time for the New Year to synchronize with Santa and give you a nice present too.

Thanks again, friends! Thank you and see you soon!